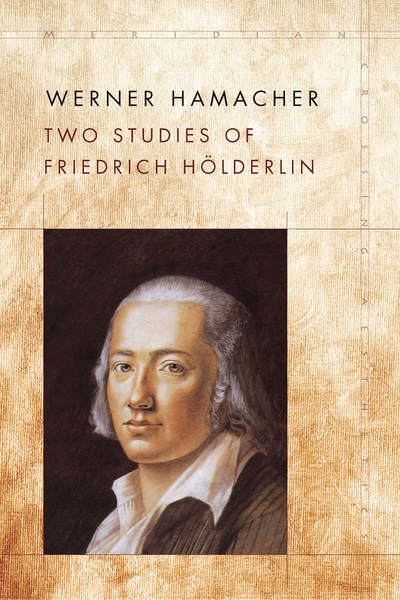 CPCT is pleased to share with you the news of a publication that may be of interest to you: Werner Hamacher’s Two Studies of Friedrich Hölderlin, edited by Peter Fenves and Julia Ng, and translated by Julia Ng and Anthony Curtis Adler, has just appeared with Stanford UP. Werner Hamacher was an external affiliate of CPCT. In October 2015, he delivered a lecture on “Now, History” at Goldsmiths in inauguration of the Walter Benjamin London Research Network.

More about the volume (including what appears to be a temporary discount code) can be found here: https://www.sup.org/books/title/?id=30564.

“Two Studies of Friedrich Hölderlin shows how the poet enacts a radical theory of meaning that culminates in a unique and still groundbreaking concept of revolution, one that begins with a revolutionary understanding of language. The product of an intense engagement with both Walter Benjamin and Jacques Derrida, the book presents Werner Hamacher’s major attempts at developing a critical practice commensurate with the immensity of Hölderlin’s late writings.

These essays offer an incisive and innovative combination of critical theory and deconstruction while also identifying where influential critics like Heidegger fail to do justice to the poet’s astonishing radicality. Readers will not only come away with a new appreciation of Hölderlin’s poetic and political-theoretical achievements but will also discover the motivating force behind Hamacher’s own achievements as a literary scholar and political theorist.

An introduction by Julia Ng and an afterword by Peter Fenves provide further information about these studies and the academic and theoretical context in which they were composed.
About the author

Professor at the University of Frankfurt and founder and Director of its Institute of General and Comparative Literary Studies, Werner Hamacher (1948-2017) was also the Emmanuel Levinas Chair and Professor of Philosophy and Comparative Literature at the European Graduate School. Hamacher co-founded and edited the Stanford book series Meridian: Crossing Aesthetics.

Peter Fenves is the Joan and Sarepta Harrison Professor of Literature at Northwestern University.

Julia Ng is Lecturer in English and Comparative Literature at Goldsmiths, University of London, where she co-directs the Centre for Philosophy and Critical Thought.

“These texts constitute a unique and highly significant contribution to Hölderlin studies, as well as a fitting tribute to Werner Hamacher, a singularly gifted and original thinker. His writings here stand alone in their scholarly mastery and philological brilliance.”

“This is an extraordinary book, in which the brilliance of literary interpretation and the force of critical argument can hardly be told apart. Each of its two ‘studies’ shines a bright light on Hölderlin’s poetry and poetics, and each bears witness to the exceptional subtlety, precision, and originality for which Werner Hamacher’s own work is known.”